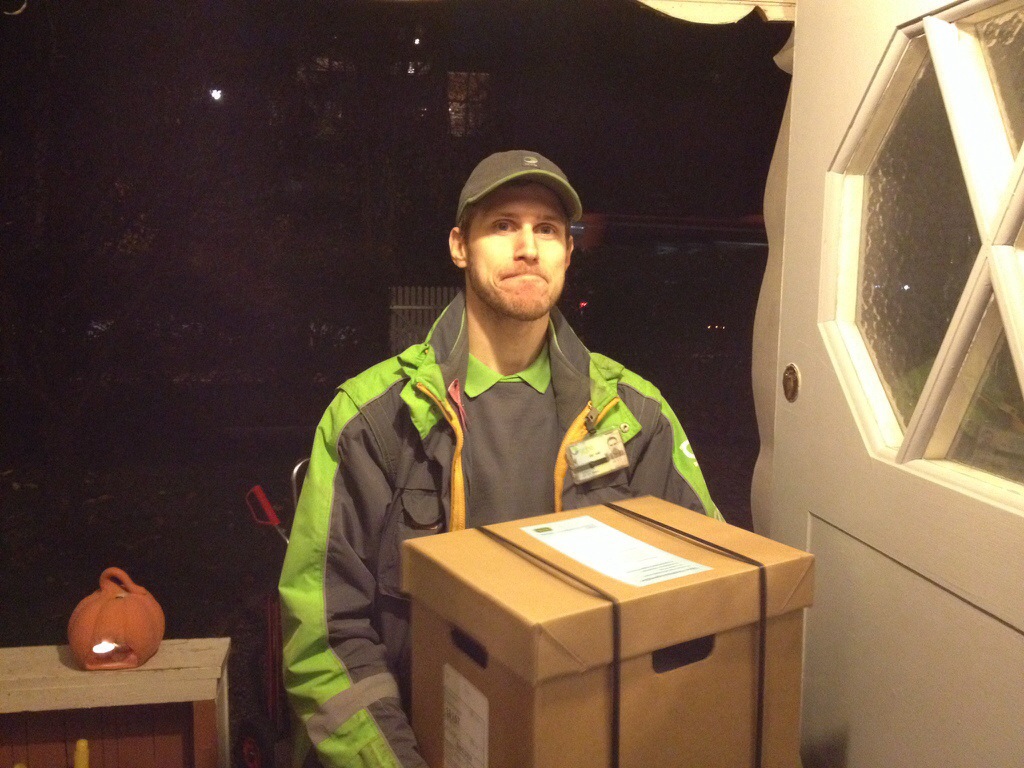 We have received a wine delivery from Systembolaget, Sweden’s state-owned retail alcohol monopoly. This was extraordinary, but it also reflects the company’s twin missions, to sell alcohol, while at the same time discouraging people from buying alcohol.

Home deliveries as a test began some weeks ago, and were extended to Stockholm in late September and to surrounding communities like ours on October 4. I would have liked to have placed an order on day one, but for various reasons had to wait until October 10. It was then that the two obstacles to home delivery became evident, the transport fee and the long wait for delivery.

From time to time we order food deliveries from Coop, the Swedish cooperative, one of many grocery chains offering that service. They charge SEK 49 to deliver, with next day delivery (except weekends). Systembolaget charges 5-7 times as much for a delivery as does Coop (outsourced to the mail and package delivery company Bring).

The cost is enough to discourage most people, but the wait seems especially designed to minimize customer interest. The earliest delivery date for my October 10 order was October 29, two and a half weeks later. This apparently to discourage impulse buying.

(And while I was flattered when I was carded buying wine at a Safeway state at the age of 42, twice the drinking age in California, it was a bit weird having my ID checked at the age of 64.)

Forced into it by the pro-temperance Liberals

Systemet was basically forced into home deliveries when EU membership meant that Swedes could order liquor from abroad and have it delivered home. One of the strongest proponents of home deliveries by the monopoly this was Carl B. Hamilton, a veteran Liberal Party MP and a member of Systembolaget’s board of directors. The Liberals are the Swedish party most influenced by the Temperance movement, and while opening up for (highly controlled) home deliveries may initially look counter-intuitive, this was apparently seen by the party as a way to prop up the alcohol monopoly and defend it against a threat.

The other three parties in Sweden’s center-right goverment have somewhat varying approaches to alcohol.

Victory over the Center

In opening up to home deliveries, the Liberals seem to have won out over the Central Party, based traditionally on Sweden’s farmers. This country has a very tiny number of wine producers, all in the south, and most apparently on the island of Gotland. These have been pleading for wine-tasting at their vineyards. This would obviously be a great boon for sales, as currently their wines are only available (sometimes) at nearby state stores. But vineyard wine-tasting would challenge the monopoly (opening the door to more alternatives), and even the proposal for Systemet to be in charge of sales at the vineyards seems to have been rejected.

The very religious Christian Democrat Party wants to be as restrictive as possible about alcohol.

On the other hand, the Conservatives (conservative Moderates), larger than all the other coalition parties put together, long actively called for the abolition of the monopoly, allowing for private liquor stores and sales of alcohol at grocery store. This was in line with their distrust of public services where private actors could do the job, as seen by their leading the campaign to break up the pharmacy monopoly and for the creation of private profit-taking clinics and schools funded by tthe taxpayers. But something happened when the party began to campaign with the other three parties before the 2004 elections. The Conservatives sought to recast their image as “The new Labor Party”, trying to sell the idea they could adminster the welfare state better than the Social Democrats who had built it.

While pundits and opposition politicians can argue over whether they have actually done that, and their steady decline in the polls since the 2010 elections wold indicate some of the voters no longer accept that image, abandonment of the traditional position on Systembolaget seems to have been part of that image recasting. Private school, clinics, and pharmacies apparently have not disturbed the model, but the restrictive approach to alcohol seems to be too finely ingrained in Swedes to rock the boat over.

← Netflix eclipses HBO, Amazon surrenders
Telia how could you delete files from my harddisk? →