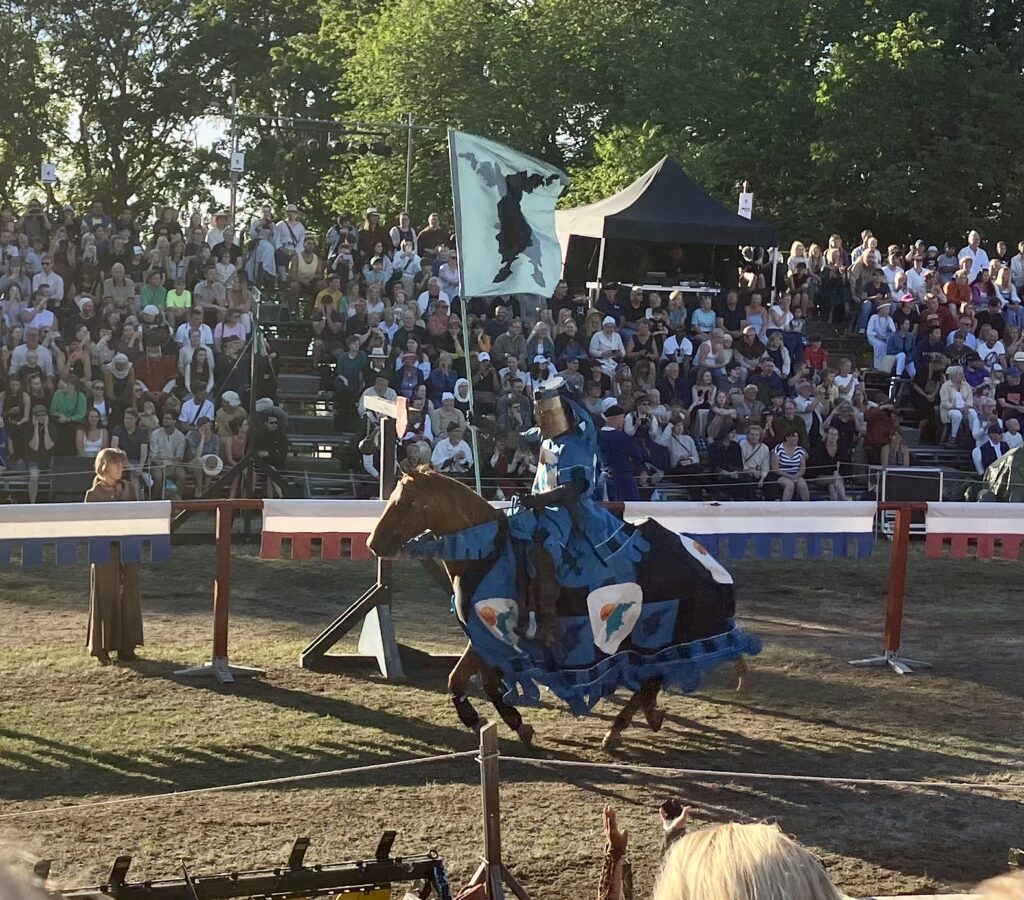 The annual Medieval Week has just ended in Visby, on the island of Gotland, with its city walls dating back to the 13th century (and before) and more than one hundred medieval churches around the island. While there were some improvements over last year, that year’s most notorious change was still in evidence and, along with some organizational problems, the event was somewhat of a disappointment.

The good news was that the popular jousting tournaments were back! Last year they were replaced in the same arena by ”Mythos”, a kind of circus show mixing up misunderstood elements of the island’s medieval history with what was apparently supposed to be Nordic mythology, but seemed to be entirely made-up. Some of last year’s shows did have a very limited amount of jousting. This year there was return to the pure jousting tournament, which was very welcome. Sadly, however, the jester group which had been an integral part of the tournaments before last year, was still absent, which was a shame. They were a fun comic relief.

There was a ”Mythos II”, but this year its made-up fantasy story made sense, because besides the Middle Ages, this year Fantasy was an expressed theme of the week. It was a good idea, broadening the appeal, but was mostly in evidence on a small scale. At the jousting, instead of being divided into Swedes and Danes, the participants and the crowd were divided into Elves and Trolls. And a lot of people wore Vulcan, sorry Elven, ears. This year the popular lectures were back to a greater degree than last year, and a number of events took up Fantasy topics.

With the lessening of fears of Covid, events placed in quarantine-like isolated islands last year moved back to their old locations. The very popular daily storytelling for children was back in the medieval ruins of the St. Per church, for example.

But last year’s most infamous ”innovation” was still in evidence. Introduced because of Covid and ensuing problems last year, the Medeltidspass, bought online and turned into a cloth or paper bracelet at the Visitors’ Center, was once again required to enter events. That meant an additional surcharge even if you had spent hundreds of kronor to see the jousting or Mythos II, or for events like lectures or concerts. The pass was also required to attend the otherwise free children’s storytelling (donations to the storyteller encouraged). Worst of all, you had to pay for a pass just to enter the wonderful Medieval Market and its food court. This is like charging admission to a shopping center. One hopes the organizers cut the fees they charged to the stallkeepers, as the imposition of the pass to enter the market must have reduced the number of shoppers.

Even more bizarrely, the pass was required to enter some restaurants in Visby, which makes no sense at all.

Organizationally, there were a number of problems this year. On opening day it was almost impossible to reach the week’s website. This might just be a reflection of how popular the event is, but it was annoying, especially if you had to buy one of those passes.

On several levels accessing the program was a disaster. The online program was cumbersome and difficult to navigate, a problem highlighted by one of the event presenters, who apologized to his audience for the difficulties. In previous years there was an excellent printed program, distributed at the Visitors’ Center, around the market, and other locations, a well as through a pdf file accessible on the website. This year that printed program was included as a supplement to local newspapers a day or two before Medieval Week started. But otherwise this year that printed program was nowhere in evidence. (This is rather strange, since it was obviously printed for the newspapers.)

Nor was there a pdf. I messaged the organizers at the beginning of the week asking where the pdf was, repeating the request 12 hours later when there was no reply. That resulted in a very rude response along the lines of ”Keep your shirt on, it’s coming in a day or two and we’ll send a link”.

That link was never sent, and when I asked again at the end of the week, the over-worked volunteer apologized for the rudeness, and admitted the pdf of the program was never produced.

There were new organizers last year, so they obviously needed a bit of slack in criticism. They did learn something, as they brought back jousting, restored the lecture program to its previous levels, and put the storytelling back in its proper location. But they certainly have not understood the problem with the passes. In response to a newspaper article pointing to the overwhelming public criticism of the passes, the organizers repeated they intend to have them again next year.

The pass was the main reason our family only spent three days in Visby, rather than the usual week. We would have visited more events, and spent more time in the market and its food court. Others would have certainly made similar decisions.

All this is a shame because Medieval Week is really wonderful and deserves better. 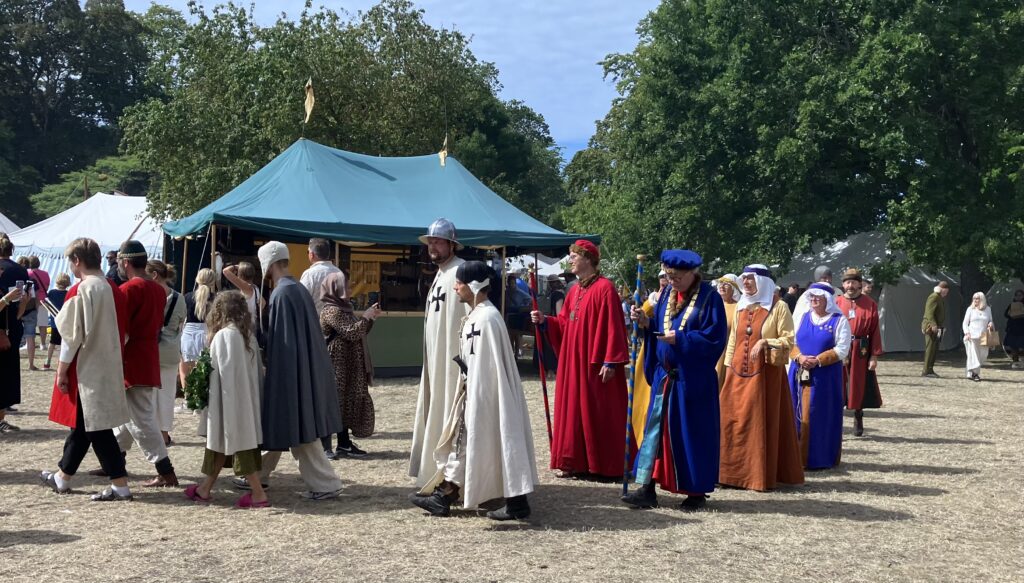 A procession through the market 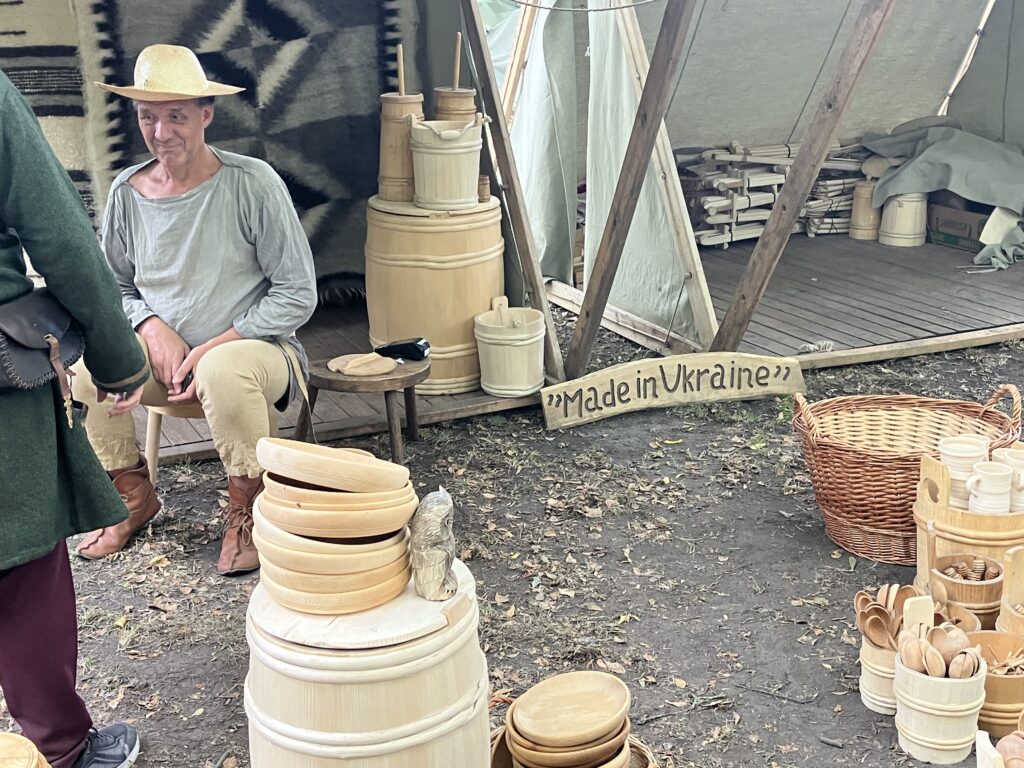 Ukraine was in evidence at the Medieval Market 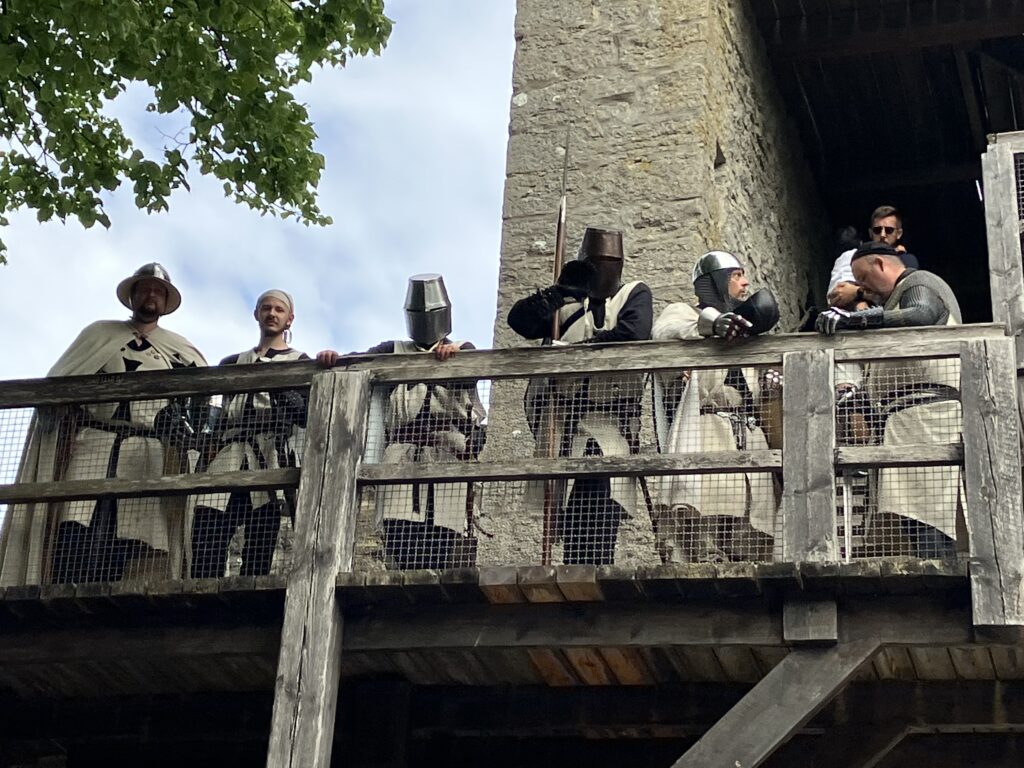 On guard on the Medieval walls 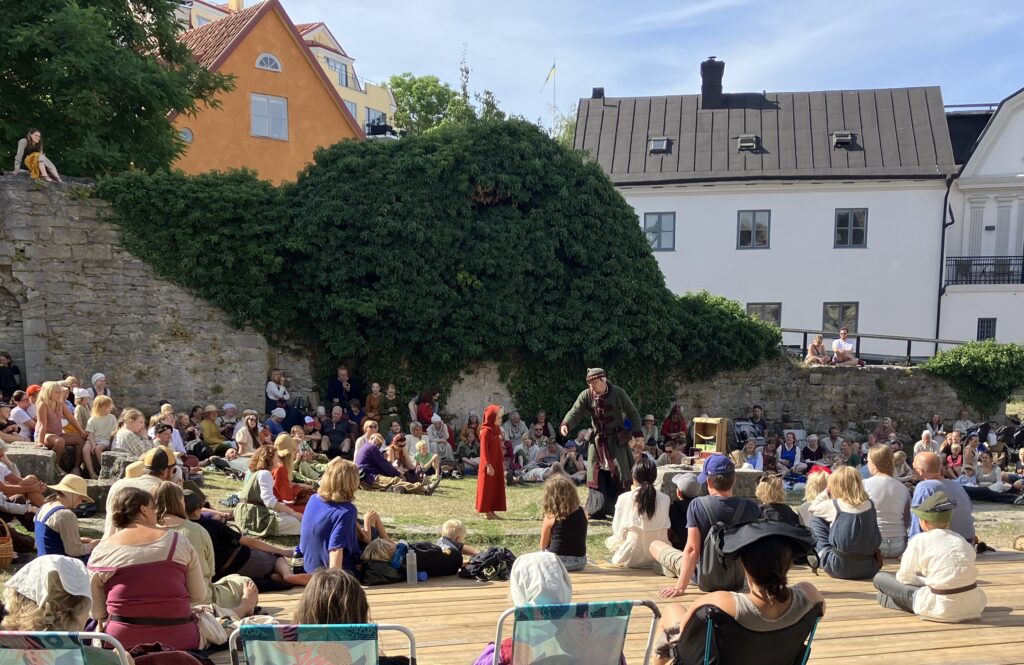 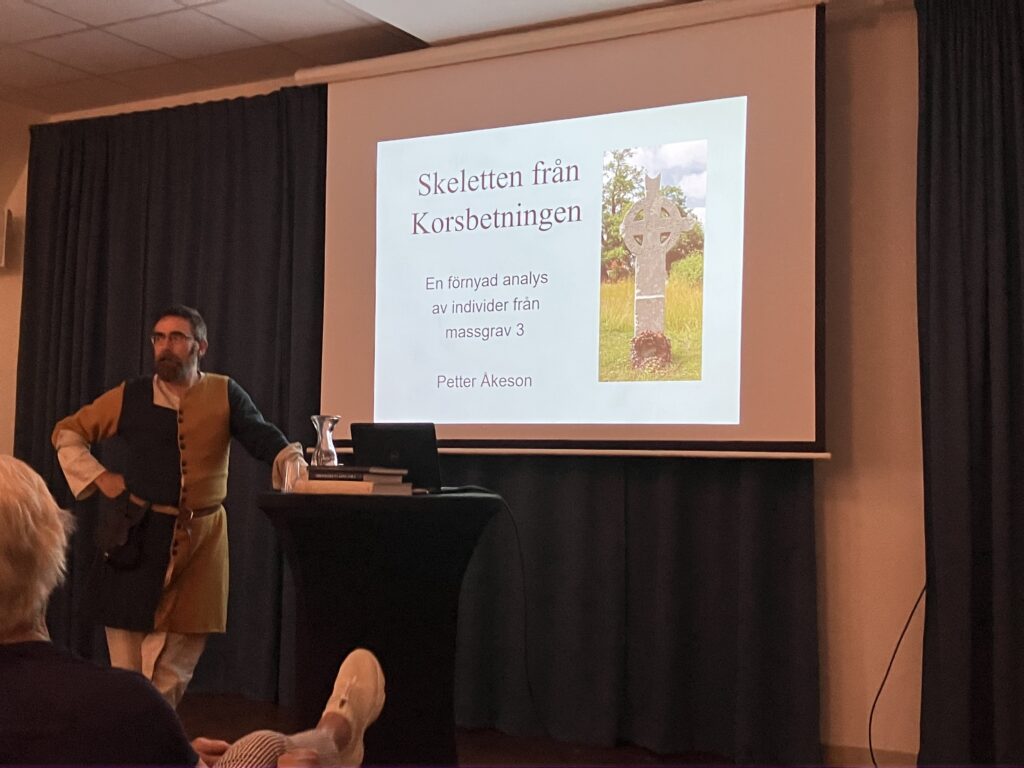 One of the lectures at the Gotland Museum 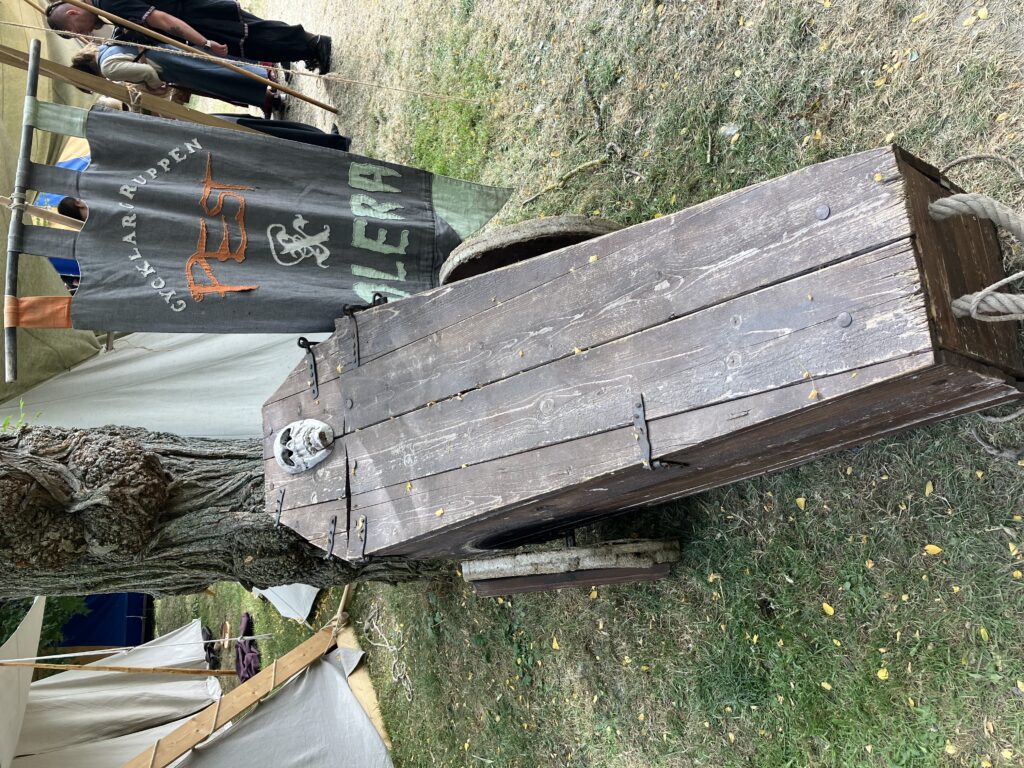 Advertising a Jester Show in the market

← Review: Return of the Pharaoh by Nicholas Meyer
Can You Explain Your Election to Me? →