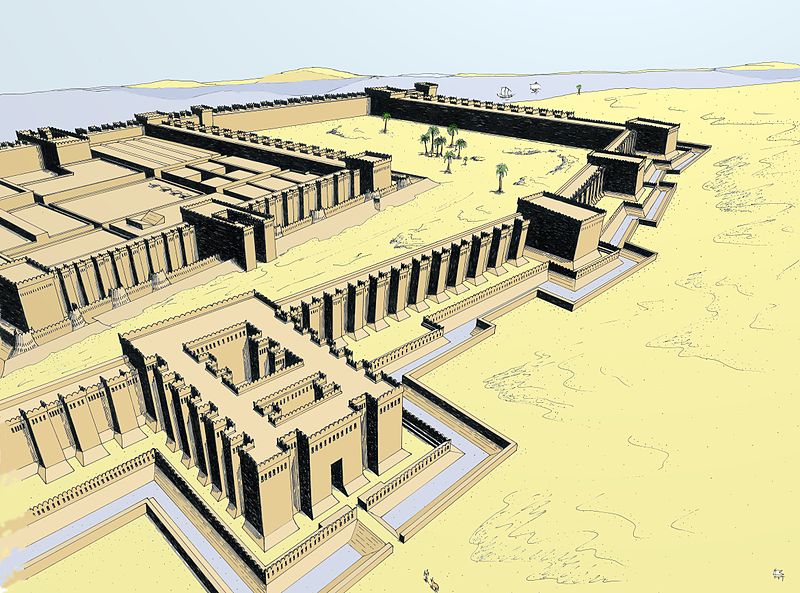 “Nubians, I was hoping to avoid them” (from “The Jewel of the Nile”)

Egypt’s ventures south, into Lower Nubia (Wawat) and Upper Nubia (Kush), were colonial, to secure access to resources, both those available through direct mining and quarrying as well as those procured through trade. In mineral wealth, Nubia offered primarily, gold, but there was also amethyst, turquoise, copper, and gneiss. It was also the channel for exotic items from the African hinterland from ivory, giraffes, and incense to a famous dwarf.

The venture south started slowly. The traditional southern border of Upper Egypt was Elephantine island, at modern Aswan. During the Old Kingdom there were already trading missions south, and the oldest construction at the fort of Buhen, below the Second Cataract, probably dates from the reign of Sneferu in the 4th Dynasty, before withdrawing during the First Intermediate Period.

The Egyptian presence returned to Nubia, ultimately in a much more spectacular fashion, with the rise of the Middle Kingdom. Under Mentuhotep II a garrison was established at Elephantine, and the Vizier Khety conducted campaigns in Lower Nubia. But these 11th Dynasty interventions were more along the lines of raids, with no lasting presence.

It was during the reign of the first king of the 12th Dynasty, Amenemhat I, that the policy towards Nubia changed, although this did not occur immediately. Early in his reign Amenemhat took an army to Elephantine, but it wasn’t until his year 29 that activity was launched farther south, and Nubian policy changed from “a network of sporadic trading and quarrying to conquest and colonization”. Senusret I twice sent armies into Nubia, going beyond the Second Cataract, and he built a string of fortresses south to Semna.

The official Egyptian presence seems to have disappeared during the Second Intermediate Period. Troops may have been left behind to fend for themselves, with some form of cooperation with the rulers of Kush at Kerma.

The earliest evidence for Egypt’s re-entry into Lower Nubia comes in the third year of Kamose, with the building of a wall at Buhen, apparently describing the rebuilding of the fortifications. After Kamose, there were campaigns in Nubia under Ahmose, Thutmose I (whose army seems to have sacked Kerma and reached the Fourth Cataract, Amenhotep I, Thutmose II (during whose short reign the Kingdom of Kush at Kerma ended), Hatshepsut, Thutmose III (who campaigned as far as Gebel Barkal, where he built a temple to Amun and left a boundary victory stela), and Amenhotep III (whose campaign across the Nubian desert may have reached the Fifth Cataract).

Here are two papers I have written about Egypt in Nubia:

The Middle Kingdom in Nubia

Buhen in the New Kingdom