This is intended as a review (and test) of Posterous, a service making it possible to post to blogs and social media from mobile devices via e-mail.

It looks good, wasn’t that hard to configure for my WordPress-blog, Facebook, Twitter, Youtube and Flickr. But this is my second attempt. My first post, about today’s expected snowstorm here in Stockholm, seems to have vanished. It isn’t even on the Posterous site.

If it does work, I’m also a bit concerned that multiple posts will spam my Facebook friends. Apologies for that… 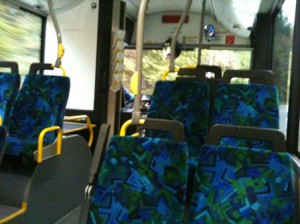 Stockholm has a great mass transit system, called SL, despite the annual problems when subway trains can’t handle the snow or the leaves on the tracks are the wrong kind for the commuter trains. But a few years ago, when they started buying new buses, the models they chose were pretty awful.

Basically most of the new buses have very little leg room for most of the seats, and lots of the seats face backwards. The latter is kind of crazy, because no one likes to travel backwards, and some people can actually get sick from it. The only advantage of having a unit of four seats where two face the other two is if four friends get on together. But almost always when that happens one or more of the four seats is already occupied, so it doesn’t help anyway.

One might have thought enough people would have complained so that SL would stop buying these uncomfortable buses. Apparently not, because new ones have appeared recently, with even less leg room and more seats facing backwards. In the earlier ones it was perhaps one quarter of the seats that faced backwards, which was pretty bad.

But this morning when I got on one of the new busses I actually counted. Seventeen seats facing forward, two fold-down seats facing sideways in the middle of the bus where the baby carriages travel…and no less than twelve seats facing backwards!

That’s just under forty percent of the bus passengers being forced to travel backwards!

Whatever SL’s considerations in buying these buses, passenger comfort and passenger opinion are apparently not high priorities.

One of my favorite radio programs is the BBC’s “In Our Time”. Every Thursday, except for a summer break, Melvyn Bragg and three varying and eloquent academic experts discuss what in Swedish would be called “idéhistoria”. Besides pure history, the program takes up the history of science, philosophy, religion, and culture.

Recent programs have taken up the Spanish Armada, imaginary numbers, and the Neanderthals.

What is frustrating is that only the program from the past week has been available as podcasts. This is especially odd as several years of programs are archived for online listening, on-demand. Which means that anyone can play the files and record them as mp3 files. Having done this several times I can confirm it can be done, but is very time-consuming.

And programs going back to 2002 can be downloaded from the Pirate Bay. So the lack of a podcast archive on the BBC website has been hard to understand. Especially since the nature of the program means there can’t have been rights issues.

No more…since the program’s return after the summer break all three episodes are still available for downloading:

Hopefully this signals a change in policy at Broadcast House. It would be nice if the back archives could also be made available, but this is great news!

Hopefully this signals a n

Often when the Nobel Literature Prize is announced, I run down to the fairly large bookstore near work to see if they have anything by the new laureate in English. Sometimes they do, often the don’t.

So I was looking forward to being able to download a Nobel winner to my iPad this year.

Sadly, there is nothing by Mario Vargas Llosa in the (US) iBook store, nor anything in English in the much larger Kindle store. And no audio books from Audible in the American iTunes store.

This is not a minor poet in an obscure language. The eBookstores can’t have everything perhaps, but the fact that they ignore such a major, albeit non-American, writer demonstrates that they have a way to go.