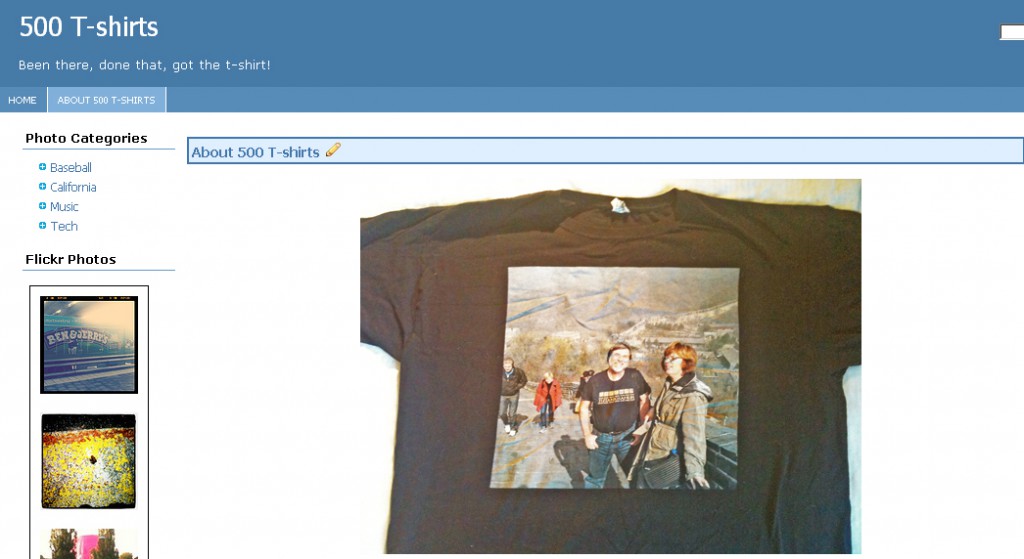 Last day at Radio Sweden before my leave of absence and Strasbourg (although we don’t leave Sweden for almost three weeks). Hope to blog here about what it’s like being in France, especially compared to Sweden. All Europe certainly isn’t the same. Also launching my new site 500tshirts.org, publishing my somewhat extensive collection of t-shirts from all over the place.

Warrick: They used to tell me back in the days, the first time you got caught cheating, they’d give you a couple whacks on the hand with a ball peen hammer.

Warrick: A long walk in the desert with a shovel.

This gangster justice sounds a lot like some versions of Sharia…. On Sweden’s national day, June 6, those who became Swedish citizens during the previous calendar year are honored. The media has covered the recent G8 meeting in France, but at least here in Sweden there’s been little mention of the e-G8 conference that preceded it, where Nicholas Sarkozy apparently discovered he couldn’t impose his vision of a controlled Internet.

Something like 1000 people took part in the meeting, which included luminaries like Google’s Eric Schmidt and Facebook’s Mark Zuckerburg, along with old media mogul Rupert Murdoch. Some, like writer and Boing Boing co-editor Cory Doctorow, refused to take part, arguing that participation would give credence to Sarkozy’s restrictive approach to the Internet. But others took advantage of the opportunity to say “non” to monsieur le Président.

Sarkozy was seemingly either somewhat unaware of exactly who he had invited, or just overly-confident that someone in his position could just force them to his way of thinking, to create a “civilized” (i.e. government-controlled) Internet.

The most high profile repudiation came from Jeff Jarvis, prominent blogger, writer (author of “What Would Google Do”), co-host of the “This Week in Google” podcast on the Twit network, and an associate professor of Journalism at the City University of New York. He took advantage of the opportunity to ask Sarkozy that in the subsequent G8 meeting he seek to “do no harm” to the Internet.

Sarkozy gave a typical politician’s answer, conciliatory, and asking whether it was harmful to impose restrictions to stop child pornography and terrorism? Apparently it never occurred to Sarko or his advisers is that this is the argument used by China to stamp out online dissidents.

Ironically, the key item on the subsequent G8 (the world’s biggest economies minus China and plus Russia) meeting was supporting the Arab Spring. Yet that revolt has been fueled by social media, the old regimes in Egypt and other countries have sought to stop it through turning off the Internet, and had Sarkozy’s proposals for a “civilized” Internet been in place, those revolts might have been nipped in the bud.

The French president also used the event to force support for more copyright protection and the music and film industries efforts to fight fair use, cloud storage, and other modern technological advances they perceive hurts their profits.

The highpoint there was a panel on intellectual property with representatives from the industry, and France’s Minister of Culture, along with last-minute invitee John Perry Barlow, poet, one-time lyricist for the Grateful Dead, and a founder of the Electronic Frontier Foundation. The last to speak on the panel, he began by pointing that he was in fact its only member who actually created content. He then scandalized by other members of the panel by rejecting the idea that content is in fact property:

I may be one of very few people in this room who actually makes his living personally by creating what these gentlemen are pleased to call “intellectual property.” I don’t regard my expression as a form of property. Property is something that can be taken from me. If I don’t have it, somebody else does.

Expression is not like that. The notion that expression is like that is entirely a consequence of taking a system of expression and transporting it around, which was necessary before there was the internet, which has the capacity to do this infinitely at almost no cost.

It’s interesting that Sarkozy tried to use the G8 as his means to impose his vision of a “civilized Internet”. Just over two years ago France tried to force its “three strikes and you’re out” law on the European Union. That legislation takes away Internet access from anyone accused (without a court trial) three times of illegally downloading copyrighted material. The European Parliament rejected the whole approach.

Sarkozy seems to have thought the forum of the G8 was a better medium to get his way, but according to reports this approach found little support from other leaders. And events in the Middle East and other areas seem to have dominated the agenda. The Swedish press reported yesterday that the Stockholm County Council and Stockholm Transport plan to raise the price of the monthly subway and bus card by 100 kr to a new price of 790 kr ($125). The card is very useful, providing free travel on all forms of public transportation in Stockholm County.

Naturally almost everyone interviewed is against a rate hike. It might be motivated, of course. There are increased costs for public transportation, and last year the company showed a loss.

But what I think is interesting is that no one ever takes up the inflation argument when these rate hikes hit. My feeling from listening to the BBC is that every time a fee is raised in the UK (except maybe for the recent hike in university tuition rates that cost the Liberal Democrats dearly in the local elections), there is an immediate comparison with the rate of inflation, to see if the increase is motivated.

The Swedish Central Bank is very hawkish on raising interest rates, not just to counteract inflation, but to forestall it. Yet no one has commented on the effects of Stockholm Transport’s huge price hikes over the years. Keeping down fees is not apparently perceived as a way to hold down inflation, although employers often cite keeping down salaries in the name of fighting inflation. There was one such call from a Vice Governor of the Central Bank in yesterday’s “Dagens Nyheter“.

According to the inflation calculator at ekonomifakta.se, kr 50 in 1975 adjusted for inflation would be kr 250 today. So the price of the monthly pass is more that three times the rate of inflation.

This might very well be motivated for many reasons. What is typical of Sweden is that no one is suggesting the effects on inflation. The consumers who have to pay the higher fees end up paying higher interest rates (and very likely seeing smaller salary increases) because of the added costs contributed by the higher fees.

Has the hack attack on Sony reached into the world of Swedish Internet banking? Probably not, but it is weird that in the midst of the outage at Sony my Internet bank is suddenly offline.

I never thought a hacker attack on a video game network would affect me much. But the outage of the Playstation Network means baseball games from MLB.tv are not available that way either. So it’s been day after day of not being able to watch the Giants.

Then there’s Star Wars Galaxies, a game that went into a nosedive after Sony Online Entertainment ruined it with a complete rewrite of the rules called the NGE. None of the people I knew who played the game pre-NGE are still there. But I play Star Wars Galaxies, because I like Star Wars, not because I am into games. As an online magazine noted at the time, SOE thought they had changed the rules for a mere game. They didn’t understand they had created and then disenfranchised a community, which is what an online game can become.

But now Star Wars Galaxies too is offline because of the hacker attack. Not only that, all of the support forums where players communicate with each other and the developers outside the game is closed down too.

The good news is that not being able to play a game or watch baseball means I can enjoy the arrival of early Summer in Sweden.

However, I really have to wonder why Skandiabanken is offline now as well? Not only their website, even their telephone service is closed. The idea that an Internet bank would be using the facilities of a games network is fascinating, but hopefully unlikely. I don’t know how many of the bank’s cutomers might have had their credit card information stolen by the hackers, but closing down the whole bank might be a way to dealing with a problem like that

Although it might be nice if Skandiabanken just said what the problem is.