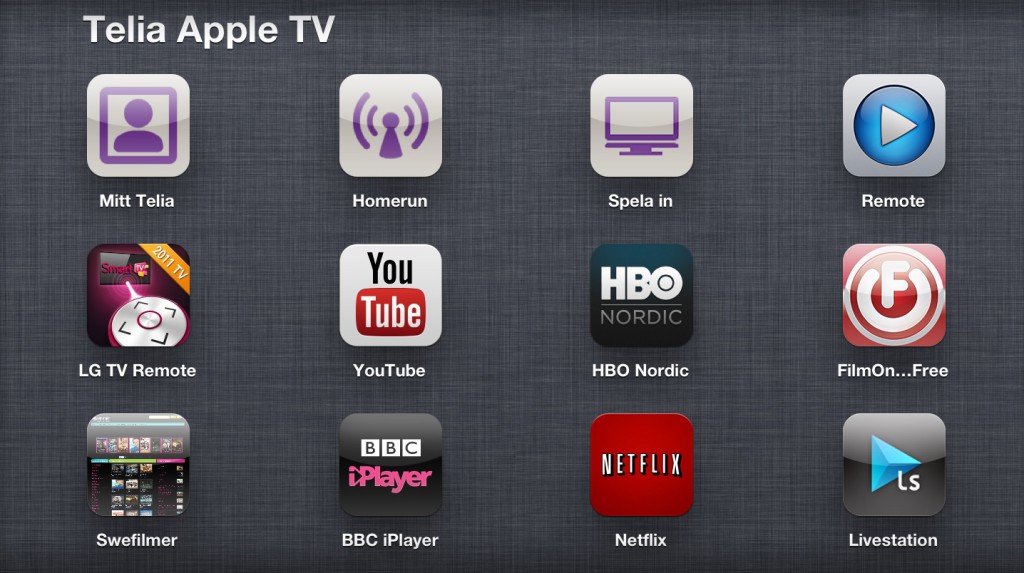 Some of our online TV choices

We’re officially cord-cutters now. Actually, we technically cut the cord at the beginning of the year, when our Comhem cable TV subscription ended, and we had actually stopped watching the cable programs way before then.

What we’ve had since last Fall has been IPTV delivered by Telia over our new fiber broadband. Until today we still had the largest Telia IPTV package with dozens of channels. It may not have been cable-TV, but it functioned just like cable. It did come with a Tivo-like system to record programs on the harddisk in the Telia box, and there was a program library of selected programs from many of those dozens of channels.

Of the three, HBO leaves the most to be desired. I was disappointed in Netflix when it launched in Scandinavia because it lacked the great variety of TV programs available to American subscribers. Nevertheless, it does have a lot of programming, and comes as an app on our Apple TV. Watching stuff is easy.

Not so with HBO Nordic, which we did have as a free channel from Telia for six months, until last week. That was OK, but the IOS app promised access to the entire library of programs, and not just a live channel with a hefty number of recent broadcasts in the program library. So I looked forward to activating the app and taking out a subscription.

Sadly the app version of HBO Nordic is a terrible disappointment. Not only does HBO Nordic still not have an Apple TV app (or an app for our LG smart TV, though apparently there is a Samsung app), the iPad interface is terrible. It is very difficult to navigate. On top of that, it lacks proper Airplay. Instead it has “Airplay mirroring”, which is clunky and most of the time doesn’t even work. We just get error messages.

And when I gave up on that and just plugged the iPad into an HDMI port on the TV, it didn’t work. At best all we got sometimes was the audio, none of the video.

For months now HBO Nordic has promised an Apple TV app and true Airplay. How hard can it be for such a huge media empire to do the coding that so many others have accomplished? Very disappointing….

← An end to roaming fees in Europe?
ios Office crashed and took my whole file →