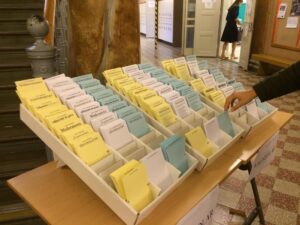 An American friend asked me to explain our recent elections here in Sweden. Presumeably why one in five of us voted for a racist party with roots in Nazism? Here is an edited version of my answer.

First of all, the election results were razor sharp. The polls for months have indicated a one seat victory by the red-greens (who in this case now are the Social Democrats, Greens, Left, and Center parties). Swedish Television’s (SVT) traditional exit poll, released at 8:00 PM right after the polls closed, indicated this as well. But here’s the thing, a lot of people were still waiting in line to vote at that point, and there are indications that red-green voters, hearing they had won, and facing possibly two hours in line, went home and never voted.

The lines are new. There are national, regional, and municipal elections. Each party taking part has its own ballots with lists of candidates at each level. You took one for each election. Until now, these were all on public display. You chose your ballots, then stuck them into separate envelopes in a screened off booth. It was pointed out that this made it very easy to see who people were going to vote for (except the tricky ones who took ballots for multiple parties or those who brought ballots distributed outside by parties). So this year all those ballots were also behind screens, where one person went at a time.

It took me 30-45 seconds to find the three ballots I wanted when I voted. But people ahead of me literally took 5 minutes to locate the appropriate pieces of paper. (Some apparently don’t decide who to vote for until they are there confronting all the ballots.) Consequently there were lines, sometimes a couple of hours long. There were voices calling on SVT to not release their exit poll until everyone had actually voted, this they ignored. As Sören Holmberg, a respected but obviously out-of-contact political science noted (according to reports) ”People in line don’t watch television”. (The newspaper commentator who pointed this lapse out was positively gleeful.) (And I don’t know how many decades people have carried portable radios that would have carried the radio coverage of the poll.)

So that’s one thing, the razor thin margin could have gone the other way if people hadn’t neglected to vote. But then there’s the reason it was so razor thin in the first place.

The Sweden Democrats (SD) are vile racists. If the left are red and the traditional right are blue, SD are brown. Most of their votes come from men and from the countryside. They had half as many votes in Stockholm as nationally. Not everyone who votes for them is a racist of course. Their appeal partly comes from how they have positioned themselves.

Their leader Jimmie Åkesson is young and slick. He plays down their Nazi past, and when some members express their true feelings they are often expelled (I think by the end all of their members on the Stockholm City Council were no long Sweden Democrats because they had been expelled.) They have some kind of ”zero tolerance” policy, except when people in Jimmie’s inner circle forget themselves. They gloss over those.

They are a right wing party and have attracted support from the Conservatives (Moderates) and Christian Democrats (who have been called ”SD lite”). Tough on migration of course, also crime (which has been increasing and which they can blame on immigrants), more money for the military, cutting development aid, cutting funding to public broadcasting, and resurrecting nuclear power. Sadly, after an early rejection of SD, the Conservatives and Christian Democrats have broken bread with them, and have embraced many of their policies. But this has apparently led many to wonder why they should vote for the copies rather than the real thing? This election the Conservatives bled voters to SD, who in the endwere the larger party

But SD has also taken many votes from the Social Democrats. Workers who are afraid of losing their jobs to immigrants, for example. Plus they have many policies about unemployment, pensions, and similar issues that working people like. These are directly opposite to the positions of the right, but the right wing parties (and their voters) seem to ignore these positions or just don’t believe SD would put them into practice.

The Sweden Democrats have also cut into the Social Democrat stronghold in the north by strongly critcising the Samis and indigenous rights. They’re big in the folkloristic province of Dalarna as upholders of ”real” Swedish traditions.

This brings us to the Liberals, who used to be considered more or less like Social Democrats who like small business. They have loudly spoken against the racism of the Sweden Democrats, and after the last election there was so much concern about SD getting into power the Liberals and the Center Party (also liberal but more farmer and environment based) signed the January Agreement with the red-greens to support a government without Sweden Democrats.

Sadly, over the months support for the agreement split the Liberals. Under their new leader Nyanko Sabuni (ironically a black woman born in Burundi of Congolese refugee parents) they left the agreement and signed up with the other right wing parties, at the same time rejecting their acceptance of the Sweden Democrats.

Sabuni was unpopular, for a long time her party fell under the minimum to get into parliament, and she resigned two months before the election. Her replacement was an older ”normal” Swedish man who ate hot dogs and also promised to support a right wing government but rejected the Sweden Democrats it would rely on. A number of prominent Liberals, including a former respected leader, announced they would be voting for the Center instead. On election night the Liberals managed to squeak in, possibly attracting sympathy votes from the Conservatives and Christian Democrats. The Sweden Democrats got more votes than the Conservatives and are now the second largest party in the Swedish Parliament.

So that’s where we are now. No one would accept Jimmie Åkesson as prime minister. The right is trying to put together a coalition. It will certainly include Conservatives and Christian Democrats. The Liberals say they will not support a government with Sweden Democrat ministers. Maybe the Liberals will get ministers.

If the Sweden Democrats push it, the Liberals could just give their support to the red-greens. They are very split. Or they might abandon all their principles and accept Sweden Democrats, in government or setting the agenda. Or first the latter, then the former.

← Medeltidsveckan 2022 – a Bit of a Disappointment