Return of the Pharaoh is the latest Sherlock Holmes pastiche by Nicholas Meyer, otherwise known as a Hollywood director (including two Star Trek movies) and writer. I greatly enjoyed the first two novels, The Seven Percent Solution (1974) and The West End Horror (1976) (particularly the latter, which featured George Bernard Shaw, Bram Stoker, and Gilbert and Sullivan among the cast). I missed his two follow-ups from 1993 and 2019, which appear to have attracted mixed reviews. This latest book, which plays out in 1910 in Egypt, attracted attention on Facebook groups devoted to the Amelia Peabody books, mysteries solved by a family of English Egyptologists between 1884 and 1922. Sadly Meyer’s book is not up to that quality.

I did enjoy Return of the Pharaoh, but unlike the Peabody books, which were written by an Egyptologist, Meyer’s book takes a number of liberties with the facts, and the entire explanation of how a hitherto unknown royal tomb was located by our heroes makes no sense at all.

In his defence, Meyer writes in his Acknowledgements at the back of the book, after thanking noted Egyptologist Willeke Wendrich for fact-checking:

“I admit I have, on occasion (tomb numbering, Egyptian-born museum curators, and the year Howard Carter was dismissed from the Antiquities Service) allowed the demands of fiction to override historical precision as provided by the professor, but I hope she and any colleagues who read the book will forgive these liberties. I made up the story I wished to tell. (I may have even made up a pharaoh, but I tell myself Homer would never pass the smell test, either.)”

The Howard Carter misattribution is the first encountered in the book. The future discoverer of the tomb of Tutankhamun is identified in 1910 as a “Chief Inspector” at the Egyptian Museum. There was no such title. Carter was Inspector of Antiquities for Lower Egypt until 1907 when his intervention on behalf of staff against a group of abusive French tourists lost him his job. Mayer’s shifting of the date to 1910 might be excused if this works in better with the Sherlock Holmes timeline, but at least he could have given Carter the right title. It seems like the use of “Chief Inspector” is just supposed to provide a non-existent parallel with police stories. (Or perhaps it is just an error by Dr. Watson, using an expression he is more familiar with.)

The question of the tomb numbering is more complicated. Tombs in the Valley of the Kings are given KV numbers, for example Tutankhamun’s tomb, found in 1922, is KV 62. Meyer insists on using “VR”, for “Vallée des Rois”, instead. This might be plausible, but I see no indications that this abbreviation was ever used. French websites today use the KV system. And even if VR was used in some circles a century ago, there’s no reason why the almost exclusively English characters in the book would do so. Certainly not Howard Carter.

Meyer admits a problem with tomb numbering, and there is a larger logical problem here. The real KV 61 was discovered in early 1910, just about the time the book takes place. It is a straight vertical shaft down to an undecorated burial chamber which was apparently never used. It does not match the tomb in the book in any way. This could of course also be acceptable poetic licence, but way the tomb is found in the book by Howard Carter is totally illogical.

Spoiler alert: The British duke searching for undiscovered tombs steals a secret map which allows him to find the tomb. This might not be impossible. But the only clue for Holmes is a murdered informant’s scratched “VR 61” in the sand, and his dying comment “trestles”, which is presumed to refer to some kind of elevated walkways making it easier for tourists to transverse the Valley of the Kings. This seems terribly vague, and I can find no reference to “trestles” employed in the Valley (they certainly might have been in 1910 but there are no such references in the Amelia Peabody books). Moreover, the elevated nature seems like nonsense as the tombs are on the valley floor. Walkways have been installed, but “trestles” makes no sense. Even if there had been such things, at one point in the book Carter remarks that “trestles”, rather than being specific, would have allowed the Duke to excavate basically anywhere.

But this is apparently enough to allow Howard Carter to locate that same tomb for Holmes.

The problem is, after the discovery of KV 60 (by Howard Carter) in 1903, obviously the next tomb to be found would be called KV 61. Now, if KV 61 was already known so that Carter could just go directly to it, as he does in the book, then it would have already been discovered and excavated. And if the location of KV/VR 61 was unknown, then the name alone was absolutely no clue in finding it. “VR 61” was not a specific location marked on a map prior to 1910. Meyer was lazy here. He should have provided a real plausible clue for finding the missing tomb. (Instead of spending some time on this puzzle, he wastes more than 20 pages describing the struggle of the Cairo-Luxor train in a sandstorm, which in the end adds nothing to the plot.)

Meyer admits inventing a pharaoh, Thutmose V. The person referred to was the eldest son of Amenhotep III, but, contrary to Meyer’s timeline, he died before his father and was only Prince Thutmose. Instead, his younger brother succeeded Amenhotep III, first as Amenhotep IV, then as Akhenaten, who rejected the old gods in favor of the sun disk Aten during his reign (after which the old gods were worshipped again). And there are no indications his reign marked a civil war, as Meyer writes.

One problem with the tomb that is the center of the book is that it contains cartouches of Thutmose, which is wrong because only kings had cartouches, not princes. But even if one accepts Meyer’s fictional Thutmose V, the name in the cartouches is not Thutmose as Meyer claims, but quite clearly Menkheperure, the throne name of Prince Thutmose’s grandfather, Thutmose IV (Egyptian kings had multiple names). The erroneous name is even reproduced on the book cover. Once again Meyer seems to have taken an easy way out. 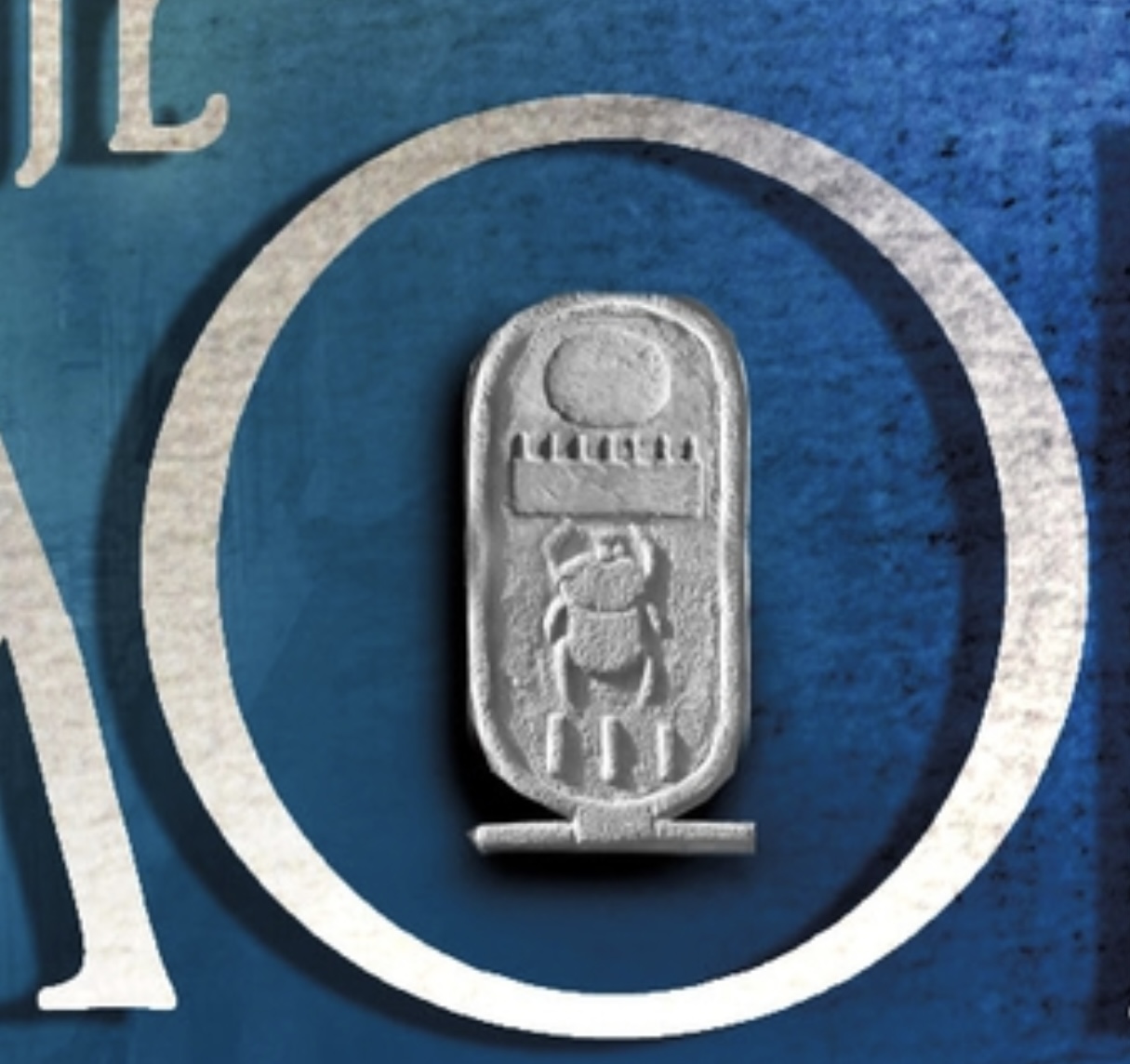 The misleading cartouche of Menkheperure on the book cover

Not admitted in the Acknowledgement are a number of geographical errors. For example, the Valley of the Kings is supposed to be 25 miles from Luxor (including the river crossing) where 25 kilometers would be more accurate. And a journey in a motor vehicle from the Nile shore to the Valley was supposed to take two hours, much longer than it would have in reality, even in 1910. Even if these can be seen as trivial exaggerations, there’s a more glaring error. Karnak, a temple in Luxor around 3 kilometers from the city center, is portrayed by Meyer as a town with a train station far enough to the north that telegrams could be sent between Karnak and Luxor. There’s no railway station at Karnak, and there are in fact real towns that could have been used if Meyer had bothered to look at a map.

Most of these are quibbles and I did enjoy the book. But taken together all the mistakes give a general impression of sloppiness. It wouldn’t have been that hard to Meyer to Google a little more and consult Wikipedia, and get his facts straight, while maintaining the same plot.

The Return of the Pharaoh: From the Reminiscences of John H. Watson, M.D. by Nicholas Meyer https://a.co/9yCa2ip